Back to all posts

The year 2020 is well underway and being International Women's Day, we are very excited to introduce our new 'Women in Music' apparel range. Read further down the page on how to get your own customised hoodie or t-shirt.

Our first featured lady in the industry is Rebecca Smart Bakken, a music marketer based in Ibiza who is empowering artists in a world where knowing how to find new engaged fans is a crucial part of achieving success in the entertainment industry.

Rebecca chose both a hoodie and t-shirt in our Sunlit Green on Black.
Here's what she had to say about being a female entrepreneur and consultant: 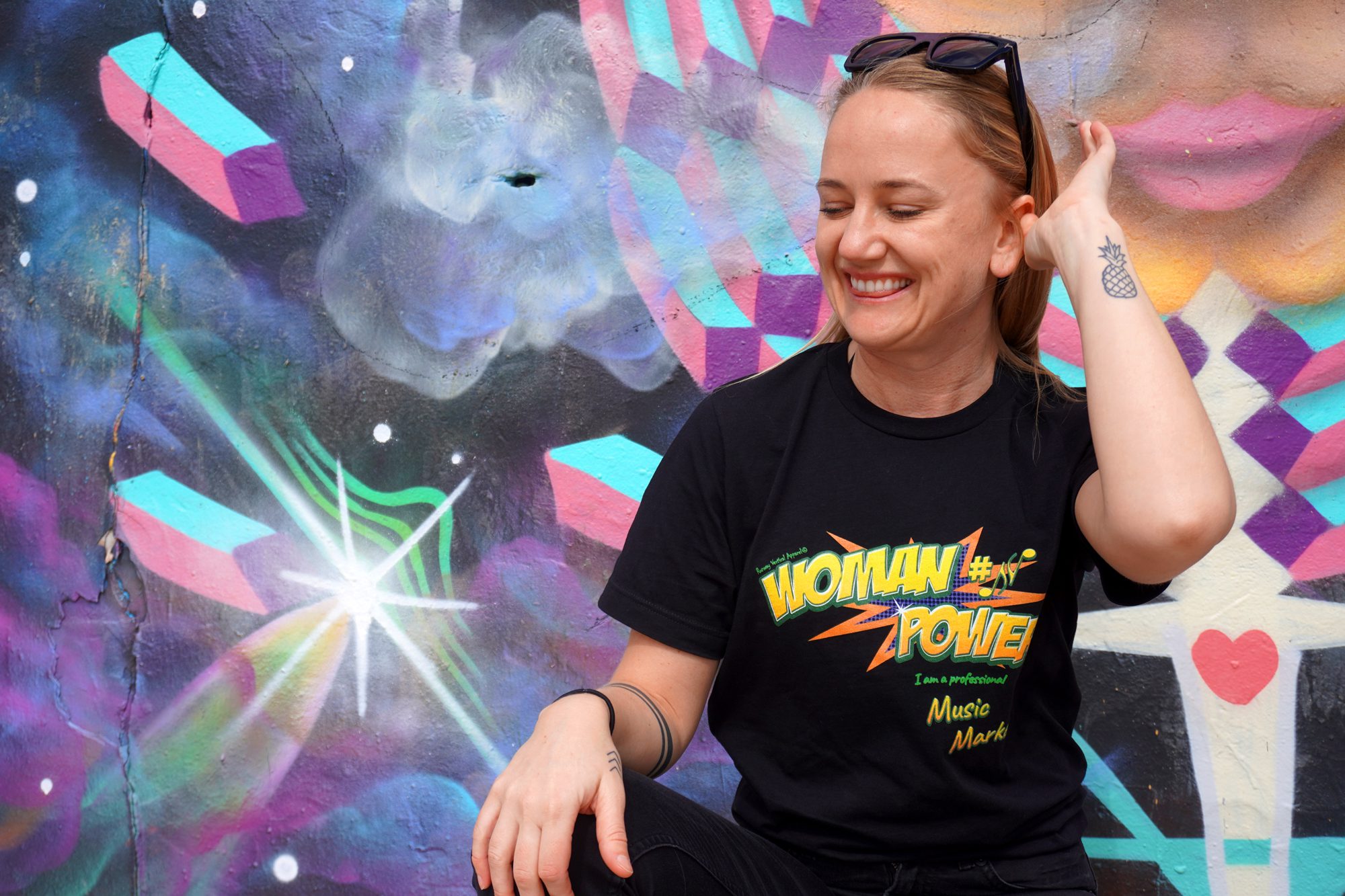 Heya Rebecca, so you were raised in different parts of the world and around different cultures.
Tell us more about that and how it has shaped your idea of what being a woman in today's world is?

Well, I was lucky to grow up in one of the most forward-thinking, gender equal countries in the world, Norway. And not only that, I was raised by a single mother of four. I was always used to seeing powerful women around me. While growing up, my father lived all over the world as he worked for different NGOs - he was deployed to war zones, emergency areas, etc.

My vacations and holiday breaks were therefore spent visiting him in fairly unique circumstances... 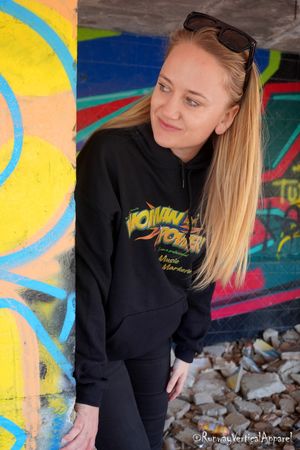 Driving past minefields in Bosnia, visiting refugee camps in Liberia, and sleeping in bomb rooms in Israel was part of growing up for me. Even though Norway was advanced in gender equality, the places I visited were not, and early on I was exposed to problems such as prostitution, female mutilation, human trafficking, rape… and women not having the same rights as men. The experiences I had have shaped me for life! I knew early on that I was privileged, and I knew I had access to things as a woman that not the average female had access to throughout the world. I have never once taken this for granted. By seeing these contrasts, it left me with a sense of helplessness. What could I do to fix this big problem? I knew the answer for ME, started with myself. I knew I had access to opportunities other women did not have. But I also knew that my journey as a woman would not be as easy, as it is for a man, and I understood this very early.

What being a woman in today's world means, is that you unfortunately still do not have the same rights as men. Even though we have come so far. We are still far from where we need to be. You, as a woman, have to work that little bit harder and smarter;  you will become more resistant. It is unfortunate, but it's reality. By knowing this you can get angry and focus on the problem, or you can devote your energy into changing that reality every day. That´s what I am doing through my journey - I am claiming, building and creating a seat at the table as a woman, a single mother, and a business executive.

What do you think is the most exciting thing about being a woman?

In the past few months, I became more visible due to my career change, by moving over to the music industry. I have received several messages from other empowering women praising and supporting me. I honestly feel that I have a sense of sisterhood around me as a woman today! We are finally beginning to back each other up, and helping each other get the seat at the table we rightly deserve. 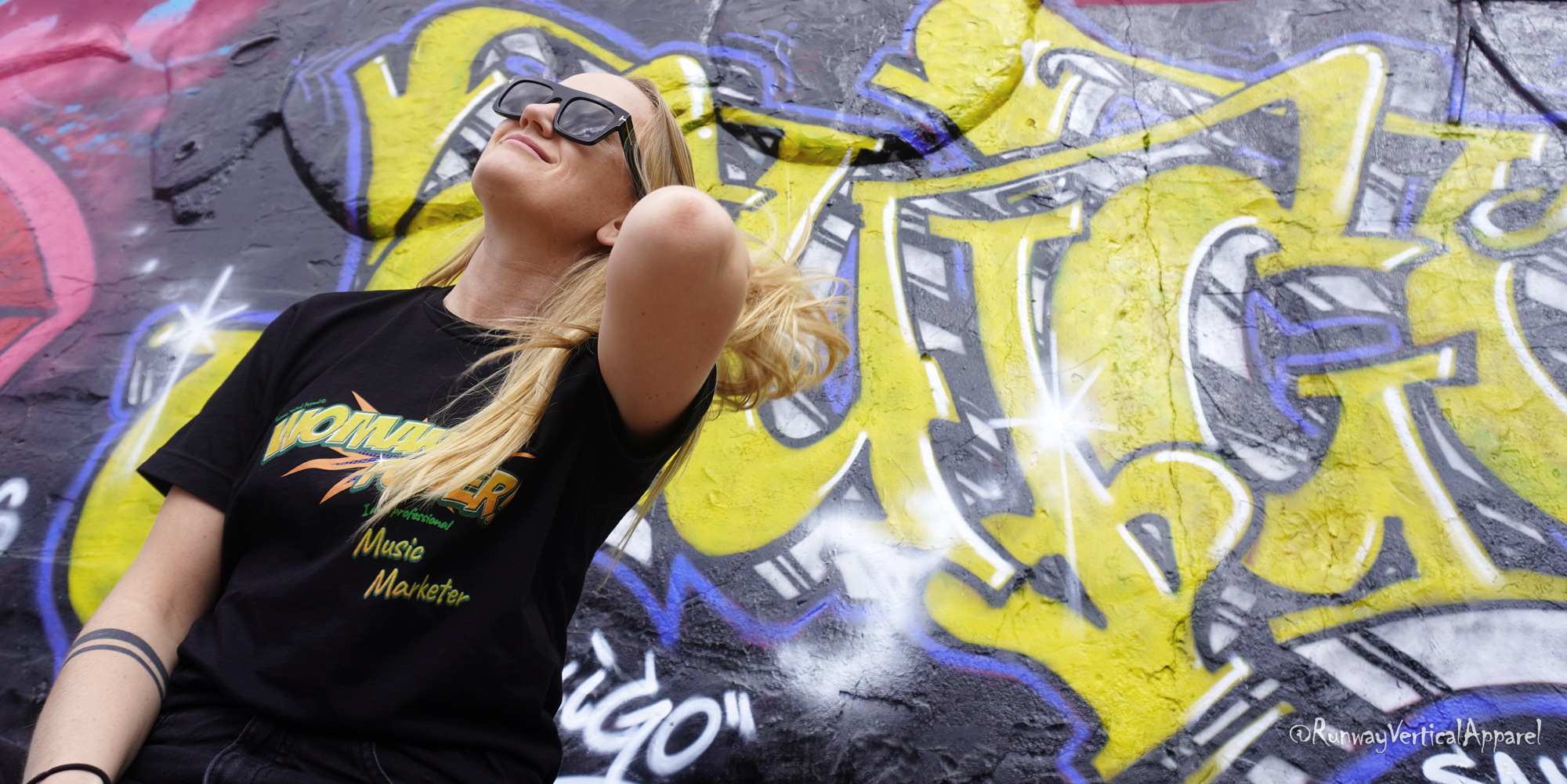 You have had a successful business career already and are building even more great projects.
Tell us about what you're working on now.

After twenty years in the tech field, I have in recent years, been involved with several educational events at arenas such as SXSW and By:larm, where you merge tech and innovation within music. That's when I got the first taste of implementing my skill set in the music industry. I was hooked. I knew this was where I needed to be to make the impact I wanted to. Music has the ability to make changes both on an individual level and in society. I understood early on, a lot of musicians out there do not have the education, experience or skill set to make it in the industry today. I want to give musicians tools and resources to build themselves up as businesses. And that starts with building a community and fan base. If you are just making music, but no one is listening to it, you essentially have nothing. 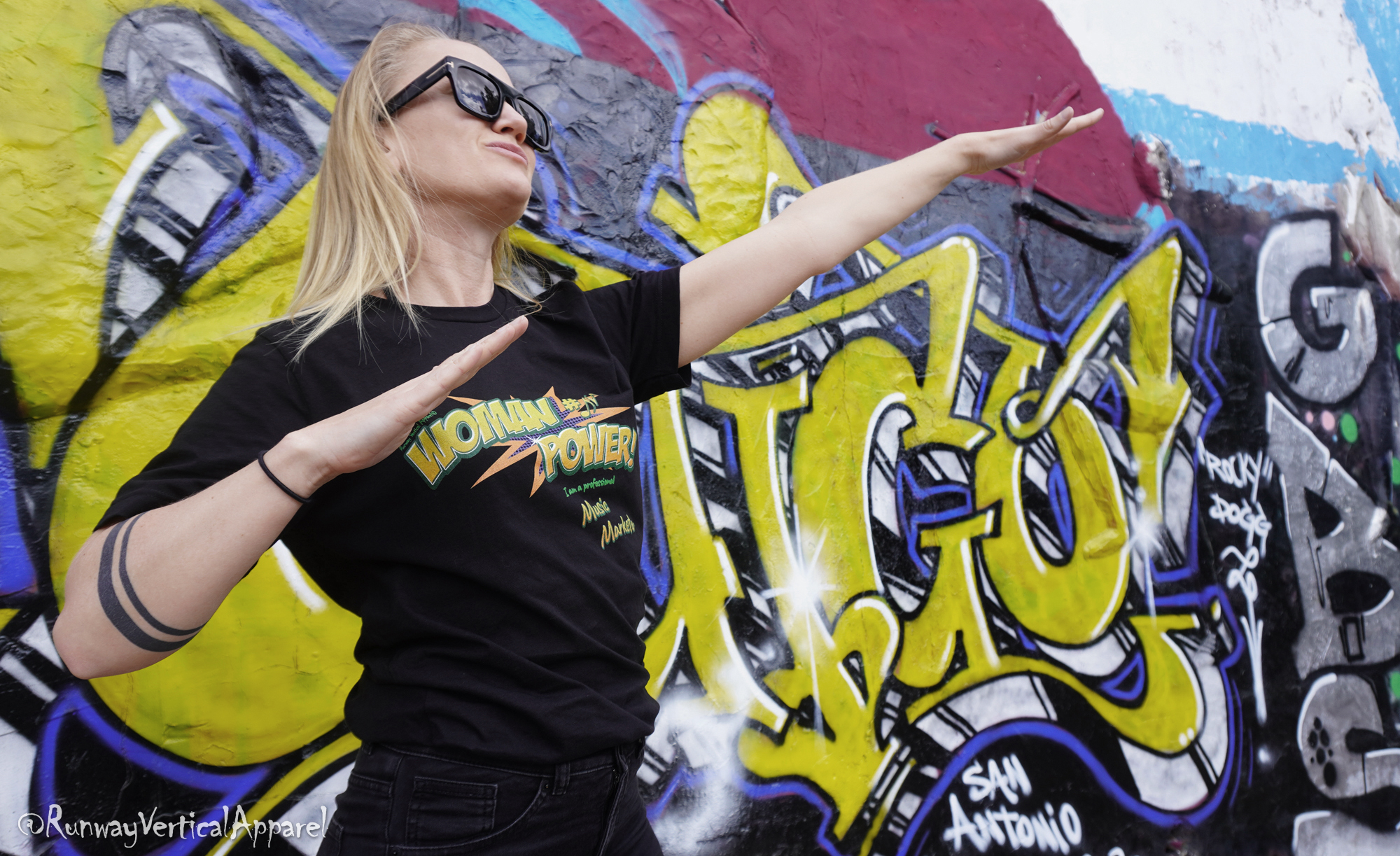 The first online course I launched was an Instagram Masterclass for Musicians which is more of a marketing class, using Instagram as a vehicle. I launched it two months ago and already have over 150 students enrolled. I have created a structure for musicians, or for their management to follow with specific strategies and activities. I have had so many teams working for me throughout my journey as an entrepreneur and consultant, where I have made tons of communication plans that had to be executed by social media teams as big as ten people. When you work with teams like this, you need structure and you need a plan. This is what I have created for musicians. That's essentially what they need, a structure and a plan to be creative around.

Give us a brief history of your career to date. How has being a woman affected your journey? 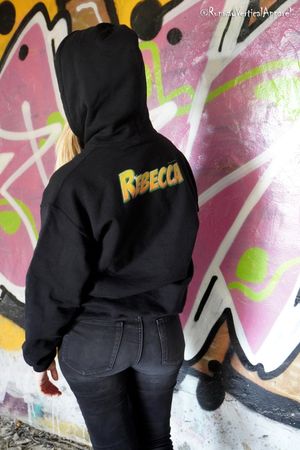 I've always been in a male-dominated industry. In my 20s and early 30s I started several tech companies that received several rounds of funding. I knew when I got out of college that I needed to create my own journey and my own opportunities. I started several companies. Tried, failed and succeeded; but ultimately I have always created my own work and income for the last decade. I was taught early on how to value myself and I got the taste of how to create something, how to lead teams, and more importantly how to lead a vision. This comes from a decade of taking risks, and not once giving up. Early on, I got a taste of what it feels like to have a seat at the table where very few women sit.

Eight years ago, I had to make some serious changes in my life. I was pregnant and knew I would raise my son alone, due to circumstances around me at the time. I had to move back home to Norway after eight years in the US. I knew I had to make some changes if I was going to continue the life of an entrepreneur with high risk-taking. For everyone else, taking risks and starting a family doesn't go hand in hand, but for me taking risks has always been a part of my DNA. I wasn't going to change who I was just because I became a mother. This is something a lot of women out there are faced with... 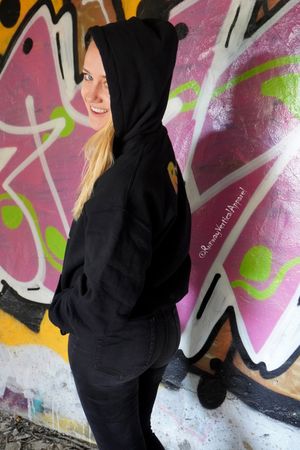 Do you put the career on the sideline when you decide to start a family? I decided to go into consulting as the money is more instant than when you invest long term in a startup. The consultancy allowed me to get financial freedom where I would still have time to build companies. That way I could continue life as an entrepreneur while making money as a consultant on the side and have the freedom and time to travel the world with my son.

In my experience as a businesswoman to this day, I have yet to pitch one of my companies to a female investor. There are very few women in the boardrooms of the companies I have been and am currently involved with; there are few women leaders in general. But it is our job as women to be consistent and not give up. I know women before me that have paved the way to allow me to have access to the opportunities I have as a woman today. It is our job now to prepare the younger generation, showing them that it is OK to take more space at the table. And men, please make sure you’re actively pulling out a seat at said table. Look around you, how many women sat by your side at your last board meeting?

What value does your work provide to the women out there and how can they get in touch with you? 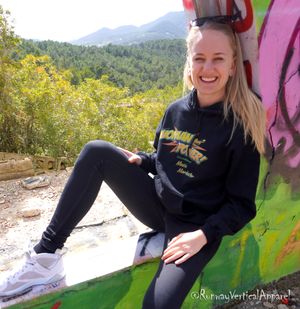 My work is not gender biased. I work with everyone. What I do with my work is simply help you first see the value in yourself, then show you how to present and communicate this. If you see your worth and the value you bring to the table, you will be better equipped in pitching both to your fans as well as executives across the table.

What´s interesting though, ever since I launched, 90% of my customers are male. 'Why?' I ask myself. What I teach is just as relevant for men as it is for women. It doesn't matter if it's through me or someone else, I encourage the women out there in the music industry to start educating themselves around the business so they can make better deals, and be better equipped.

I also in the future, want to do something for the younger generation of women coming after me. They need to have the guts to take up more space. It doesn't matter if you are a woman or a man, what it is all about is your self-value, But when society values men over women, we do have a disadvantage. I therefore want to create an arena to prepare the younger generation so they will take more space, and claim a seat at the table, and if the seat is not there, to help them build it!

In any business, we need both perspectives because women and men are human first and foremost but women and men can contribute with different outlooks based on their gender as well.

If you could describe a world where healthy gender equality existed, what would that look like? 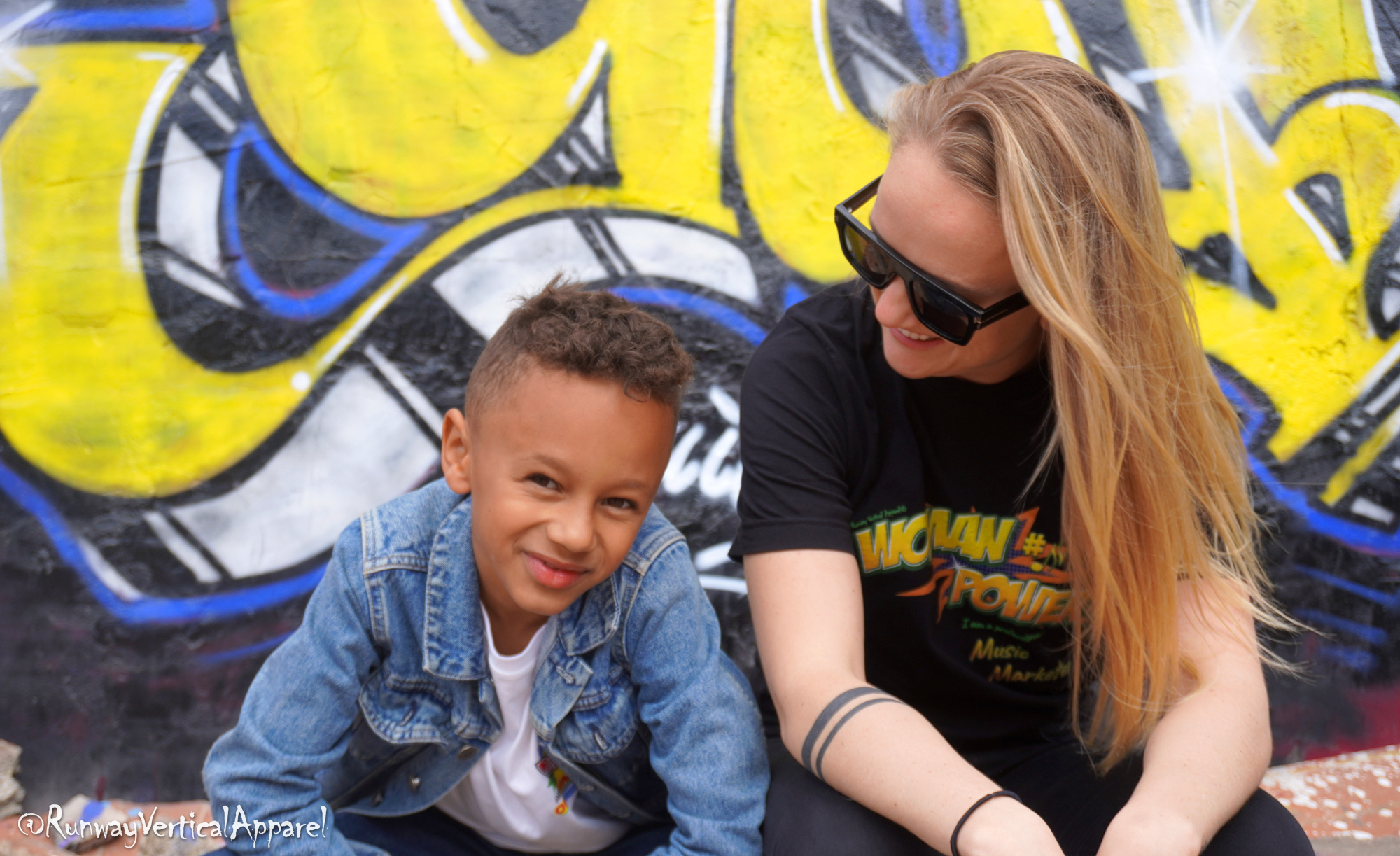 Rebecca and her son Levi who is a professional dancer

And my message to men out there is to make room for us at the table, same as the room that was once made for you at the table. 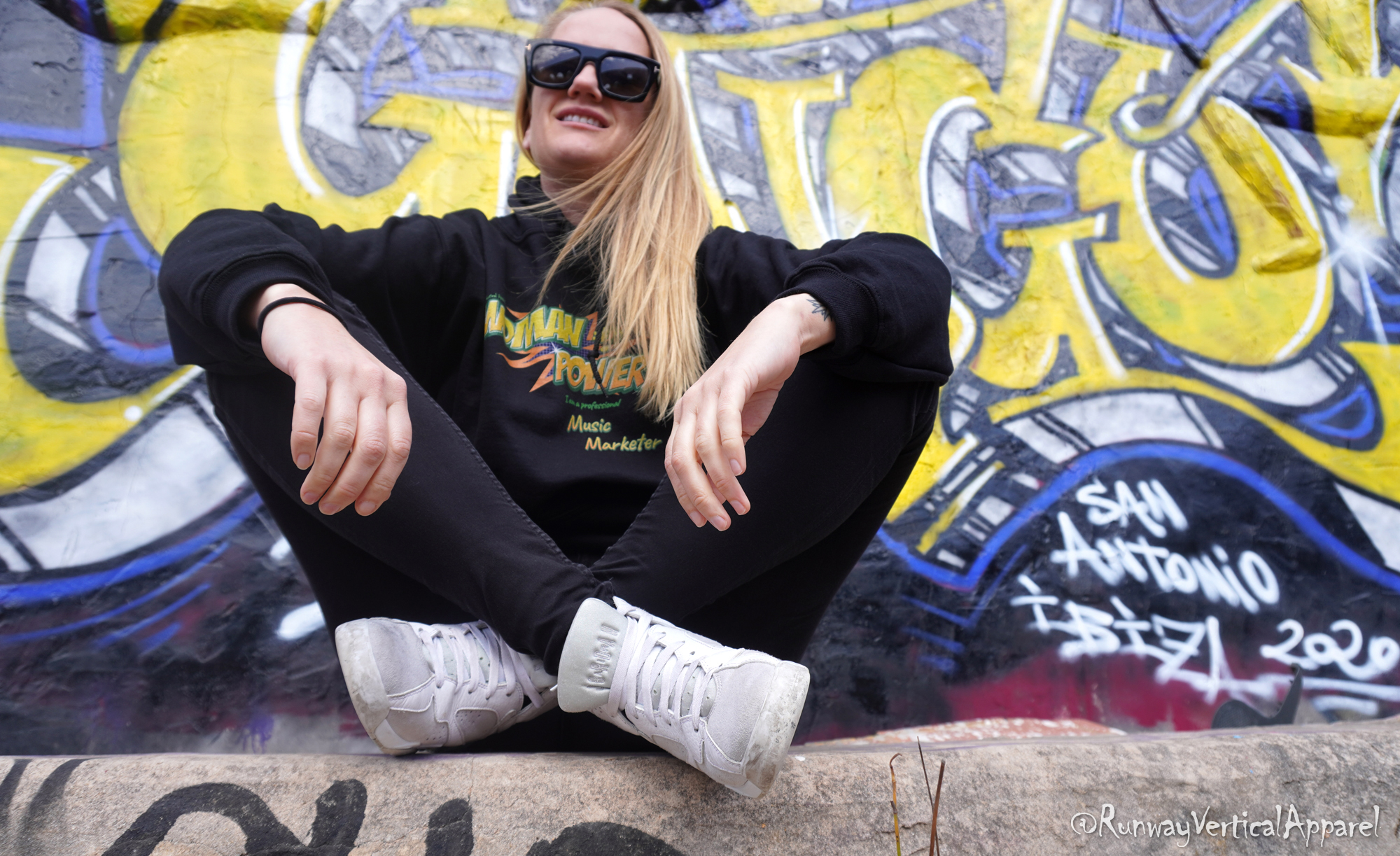 Thanks for the great chat Rebecca and congratulations on being the very first owner of a Runway Vertical Apparel piece! Whoop!!

Learn how to get more followers

If you would like to order your own Women in Music hoodie or t-shirt, simply let us know by clicking HERE so we can notify you once we've launched.

Also let us know if you are interested in being featured in one of our interviews and we'll be in touch.